We start out each week with a carefully thought out plan.  And within the space of hours, the plan seems to change as urgent calls come in to support Palestinian villages under attack.

Such was the case this Thursday, June 27, 2013.  We were planning to go to Iraq Burin, a community near the illegal Bracha settlement to prepare an incident report about fields and olive trees burned by settlers.  And then we get an urgent call:  “Can you please hurry?  The army is demolishing our homes …”

The note of despair and urgency in the voice was unmistakeable.

So off we went, my roommate Adam and our trusty guide Ghassan in the yellow Volkswagen van, down, down, down into the Jordan Valley.

Along the way, the landscape is breathtakingly beautiful:

We descended and drove down a very rough road to the village of Mu’arrajat, several kilometres north of Jericho.  We met Mohammed Ali Molehed (on the right) and his son Ali Sulieman Moussa Molehed (left) where their homes used to be.

They gave us permission to print their story and their photographs and said:  “Tell the people in your country what is happening here.  We will not leave.  Where is there for us to go?”

They were told by the Israeli military in 1984 that they could live in this place, next to a large water reservoir and a school.

However, at 5:00 a.m. on Thursday, June 27, 40 Israeli military and border police arrived, with three cars of workers from the Israeli Civilian Authority and 2 bulldozers.  They ordered the two families out of their homes and moved them away from the area, putting them down on the ground with soldiers pointing their weapons at them.  The bulldozers went to work.  By the time we arrived the Israeli military had left, and this is what we found: 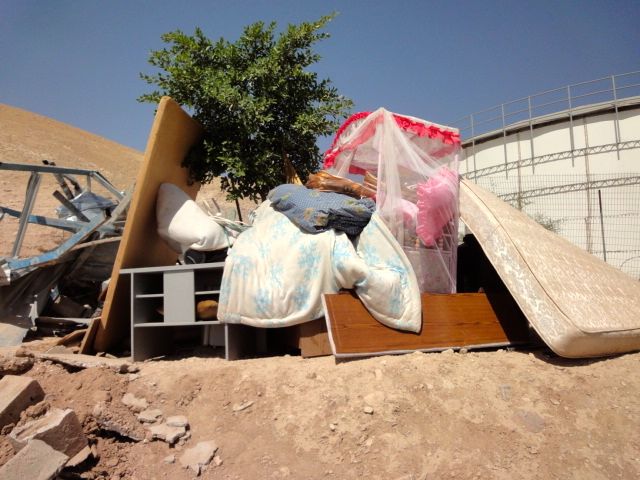 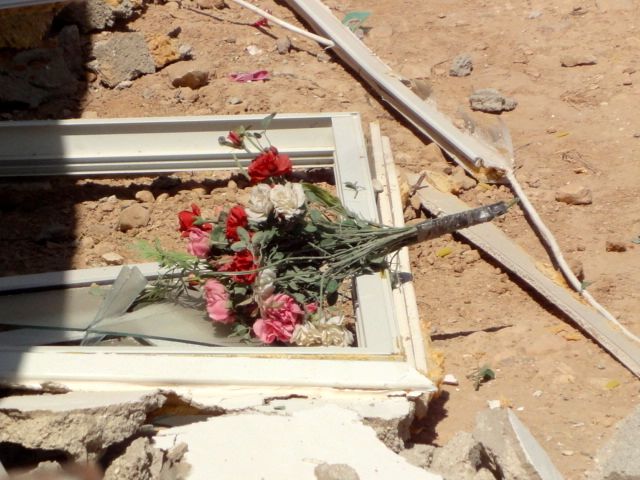 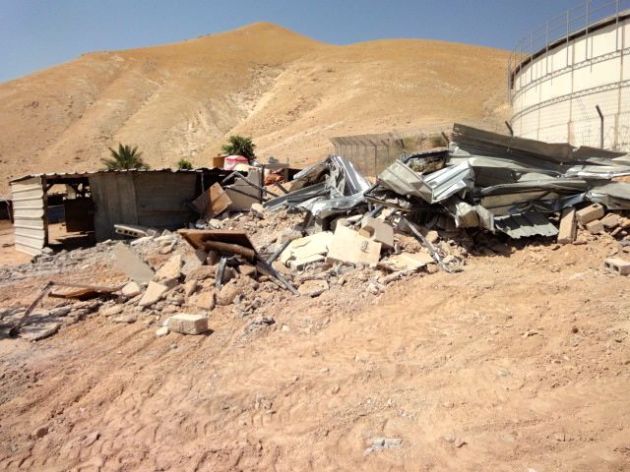 Neighbours arrived and were clustered around to support the family as we took notes on the incident.

The families were devastated.  Their neighbours are fearful that their homes are the next to be demolished.

We were in a state of shock — that human beings could do this to others, in such a callous manner.  Mind you, it was still early in the day, and the heat in the valley was rising.  Their animal shelters were left intact, so their flocks of sheep had shelter while the family did not.  The families offered us tea and thanked us for coming to them, cultural gestures that are always present in good times and in bad.

From the Bedouin community of Mu’arrajat in the Jordan Valley, just north of Jericho, West Bank.